Two Selby College students have been shortlisted for the prestigious Association of Colleges Student of the Year Awards.

The Awards highlight exceptional students from across the country in four categories, with 22 students from 18 colleges making it on to the shortlist.

Kizzy Wade, a Vocational student at Selby College, has been shortlisted for the Young Student of the Year Award.

A keen poet and spoken word activist, Kizzy was nominated for her commitment to raising awareness on issues such as disability, mental health and challenges people face in society, through her writing.

At only 16 years old, she has already carried out her own solo show at the Edinburgh Fringe Festival and has taken part in a number of poetry books to raise money for charity initiatives such as Guide Dogs and the House of Bread (HOB), an organisation which supports vulnerable and homeless people.

Kizzy lives with Spastic Quadriplegic Cerebral Palsy and OCD, which she admits has often made accessing the arts more difficult. However, she has not let this stop her breaking through her physical limitations to create art.

“Kizzy is a phenomenal student and has achieved so much during her time at Selby College and in her personal life. She has overcome many challenges including starting her course during the pandemic and having to adapt to online learning. Despite this, her determination, passion and ambition to do well has shone through. She is a true inspiration and I’m over the moon that she has been shortlisted for such a prestigious award."

Adult Learner at Selby College, Mark Reynolds, has also made the shortlist for the Adult Student of the Year Award.

Alongside his studies, Mark works for the North Yorkshire Fire and Rescue Service. In December 2020, he wanted to embark on a new challenge, so he applied and was given a conditional offer of employment as an Emergency Care Assistant with the Yorkshire Ambulance Service.

To finalise his application, Mark required his Level 2 Functional Maths and English qualifications. Determined to follow his dream of joining the Yorkshire Ambulance Service, Mark began his journey at Selby College’s Adult Learning Hub to carry out his qualifications.

Nine months later, Mark has completed both of the Level 2 Functional Maths and English courses and is now undertaking a Level 2 European Computer Driving Licence (ECDL) qualification in IT at the College to expand his digital skills.

“I was a part of a collective team at the College that helped Mark and he was a real pleasure to teach. He fully deserves this award as he had to overcome so many mental blocks and I am extremely pleased for him now that he has passed his Level 2 Functional Maths and English qualifications."

The finalists will be announced at the AoC’s Annual Conference in November, with the winners and runners-up being announced at a parliamentary reception in January.

To find out more about the AoC Awards, please visit: https://www.collegeawards.co.uk/student-of-the-year 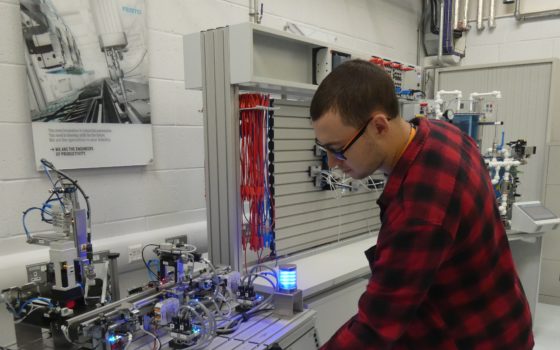