We are currently experiencing problems with our phone system. We are working hard to have this resolved by early next week. If you have difficulty in getting through to us, please email info@selby.ac.uk with any enquiries and we will respond as soon as possible.

Kizzy Wade, a Vocational student at Selby College, has been named as the Association of Colleges’ Young Student of the Year.

Nominated for her commitment to raising awareness on issues such as disability and mental health, Kizzy is a keen poet and spoken word activist who aims to address the topics important to her generation through her writing.

Kizzy lives with Spastic Quadriplegic Cerebral Palsy and OCD but has never let this stop her breaking through her physical limitations to create art.

At only 17 years old, she has already made great strides in the poetry industry by hosting her very own Edinburgh Fringe show, as well as writing poetry books and fundraisers for charities such as Guide Dogs, the House of Bread and Smile for a Child.

She has also previously been nominated for a TrinityTalent Award for her achievements with spoken word and has completed her Arts Award with Collective Encounters. Her passion and talent for poetry also secured her a summer placement with the National Youth Theatre in 2021, a world-leading youth arts organisation.

Beyond poetry, Kizzy spends her time playing Powerchair Football and was a part of the England Under 16’s Squad as well as playing for her local team, Leeds Powerchair FC.

I’m delighted to be named the Association of Colleges’ Young Student of the Year and to have my work recognised on a national scale and by a leading awards scheme. Poetry is more than a hobby to me, it is a way for me to express my opinion and thoughts through an art form to advocate for and help others. I want to be able to use my writing as a vehicle for social change to reduce stigma around important topics such as disability and mental health, ensuring that those who don’t necessarily have a voice, are heard. I’m looking forward to starting on a creative writing course at the University of Lincoln in September, where I hope to continue to drive my poetry platform forward.

The annual awards recognise students who have used their talents to give back and positively impact their college or community.

Nine students made it through to the final stages of the awards across four categories, which were selected from a shortlist of 22 students from 18 colleges.

Each year the level of applications is extremely high, and it goes to show the fantastic work that students are doing in colleges as well as the lengths colleges go to support their students. It is particularly amazing to see the achievements of students and positive impact that colleges have on the students and the community. Kizzy has done amazingly well to finish first and should be extremely proud.

Due to there being no physical awards ceremony, the Association of College’s Student of the Year 2021/22 award winners were announced by its Award Sponsors NOCN Group, Pearson, Shakespeare Martineau, and Edge Foundation.

The announcement was made on Monday, 14 February on Twitter, as well as on the Association of College’s awards website. The College held a celebration on its campus to mark the occasion, which was attended by Kizzy’s parents, tutors and other support staff at the College.

The Association of Colleges’ Student Awards scheme is a great opportunity to highlight outstanding students such as Kizzy who go above and beyond to positively impact their fellow students and the wider college community. Kizzy is a fantastic example that when you are passionate about something, you can overcome and achieve anything. She rightly deserves the recognition of the award and is an inspiration to others.

Find out more about the AoC Student of the Year Awards at: 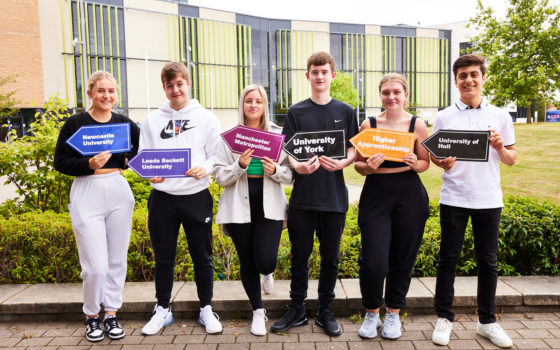